When I left you last, my contractions had petered to a halt. They kind of pulled a Lindsay Lohan, had a good run at the paparazzi headlines and dramatic breaking news, then... disappeared in a cloud of shame. I slept a nice little piece, woke up with fresh resolution, and went about the hot, hot, hot day. That was 2 pm-ish to 4 pm-ish, and by 5 my contractions were back with jazz hands.

Ok but this time they meant the business. They kind of snuck back in and took their time, all 20 minutes apart-like, but they started this new thing that I believe we call "back labor." Or "yiiiiiiiiiiiiikes, this hurts." Here is where my resolve started to crumple up and heave itself toward the wire wastebasket, so to speak. When we started out for the hospital, round #2, it was around 11 pm on Saturday night, just shy of 48 hours after my labor's inception. I had had it, Sean's right hand had had it, that handle thing that hangs above the passenger window of our Yaris had had it. The contractions had taken their toll on all of those things. And I was starting to narrate each one with some pretty foul language, which is not very zen for the whole birthing process. It's no wonder Weston was like, Are you my mother? I'm staying in here.

I was being far from brave. I was being a huge pansy at this point. My contractions were 7-8 minutes apart when we left this time, but I might have fudged on that time frame when I called Labor and Delivery to let them know of our impending arrival, because I didn't want them to tell me to wait longer. I think I may have said 5-6 minutes...I don't know...it's fuzzy. I wanted a flippin' epidural.

And here I would like to note the stark contrast of this hospital arrival to our arrival the night before: Sean all but carried me in; I feebly signed something from my fetal position in the waiting room chair while Sean took care of the rest of the paperwork; I pretty much dragged my body against the wall down to Labor and Delivery. Have you seen The Brave Little Toaster? (The answer better be yes. It is only the best cartoon of all time.) I was Blankie. 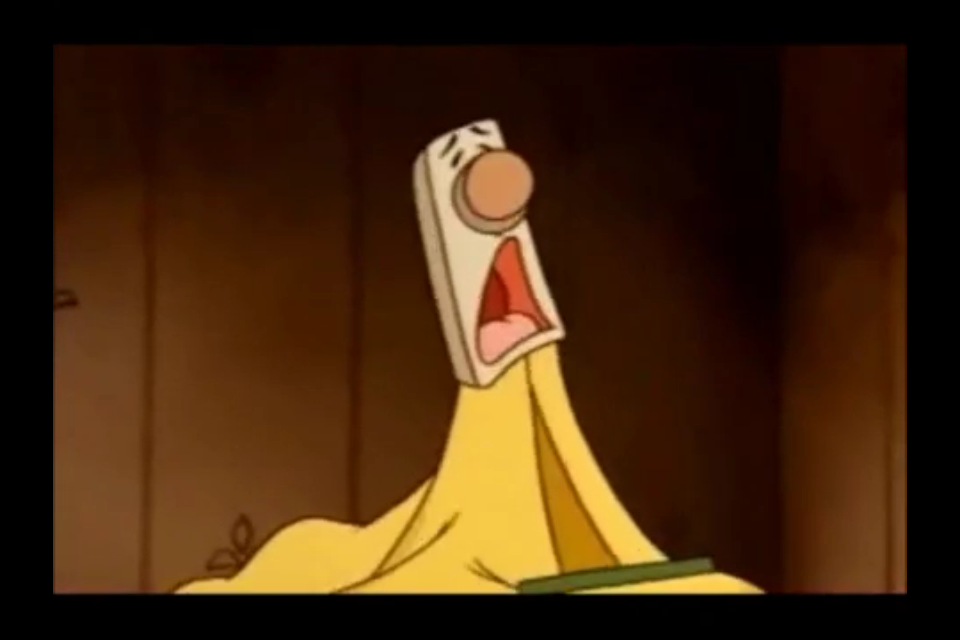 And Sean at this point I'm sure was internally grumbling like Kirby the vacuum: "ugggh, cry, cry, weep, wail and sob - it's disgusting!"

Song & dance, hospital gown, all the hookups to this machine and that one too, nurse checks me...THREE. As in, 1.5 centimeters in two full days. (I was already at 1.5 cm at my last doctor appointment.) The nurse called my doctor, she came on in around 12:30 or 1 a.m. Sunday morning, and basically to sum up: "We can give you an epidural and you can keep laboring if you want, but your body doesn't seem to want to dilate and the prolonged labor may be putting stress on the baby. I can call a c-section team in..."

You mention the safety of your baby to a pregnant woman, all bets are off. I was ready to cave anyway if they couldn't give me the drugs. Within half an hour, I was being wheeled down nostalgic C-Section Lane and Sean was suiting up in the funny sterile costume everyone wears in there. As it all was happening, and mingled with the anticipation and excitement about meeting my long awaited baby boy, I couldn't help but feeling pretty darn disappointed in my body. I know I shouldn't - it does really amazing things like foster and form beautiful, healthy humans over the course of nine months - but I look my broad frame and my unmistakable "child-bearing hips" and wonder, why couldn't you? Those are thoughts for another time, I guess. Digression finished.

So. My doctor was kindly giving me little tidbits about the progress of the surgery from over the curtain. When she laid eyes on Weston, she informed me, "This would have been a tough one Jessie. He's sunny side up and his shoulders are really broad!" God knew best, then. Ouch for all involved parties. Just about as she was telling me this, I heard a little gurgle followed by a hearty, healthy cry. And there he was! Sean rushed over to greet him but I was a little, er, tied down. I waited for them to wipe him up a bit, then a nurse nestled him next to my face for a few moments. I was pretty loopy at this point, but I think the very first thing I said to my son was "You have such squishy lips!" Oh, but they are. Kissable to the nth. 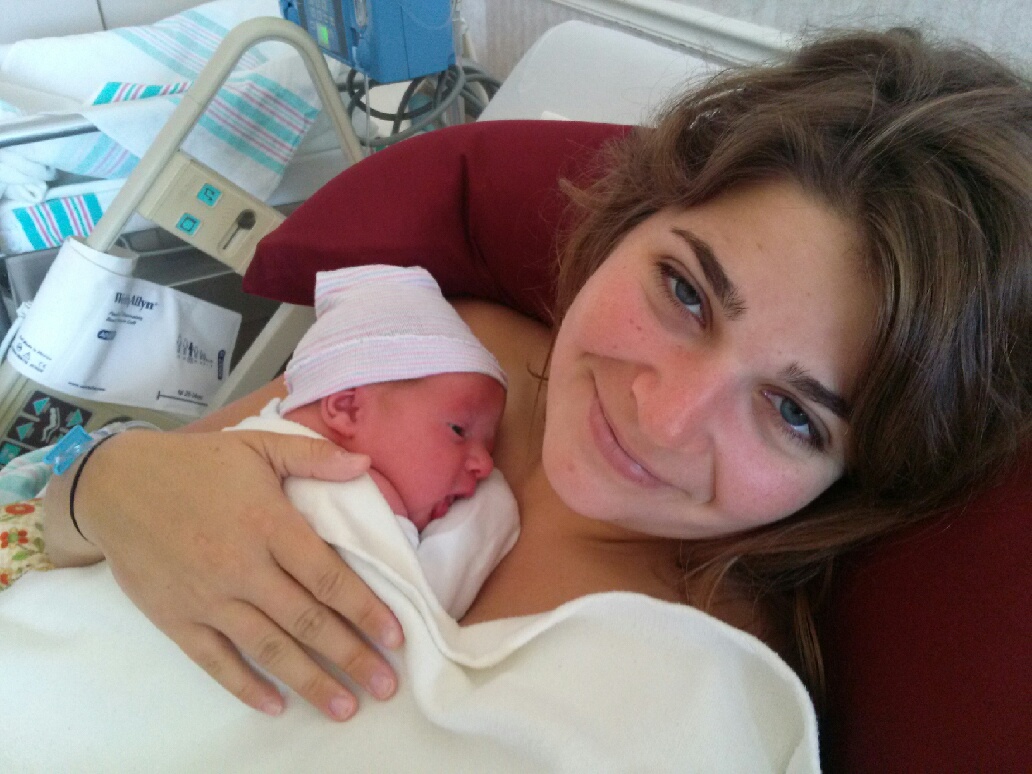 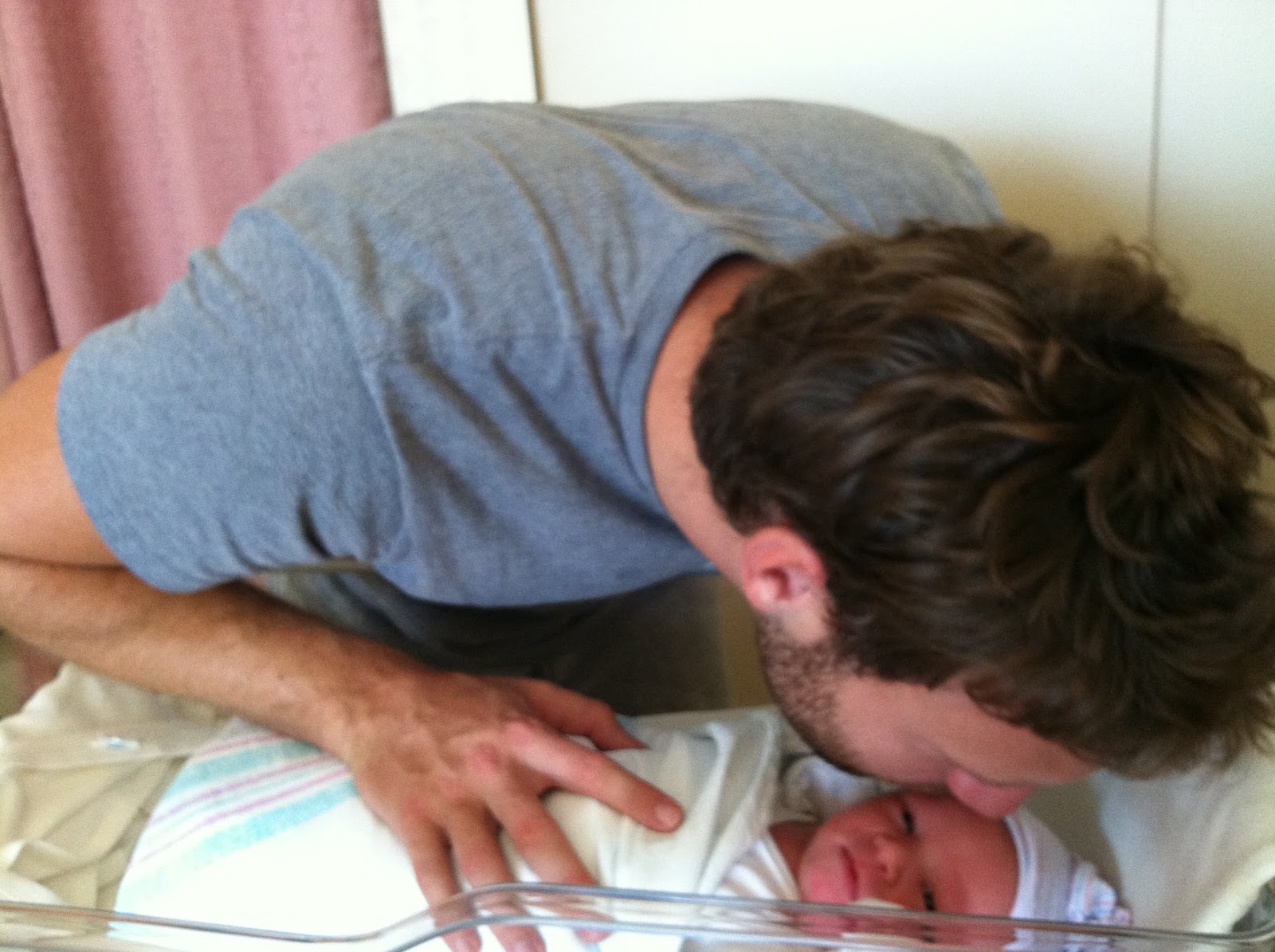 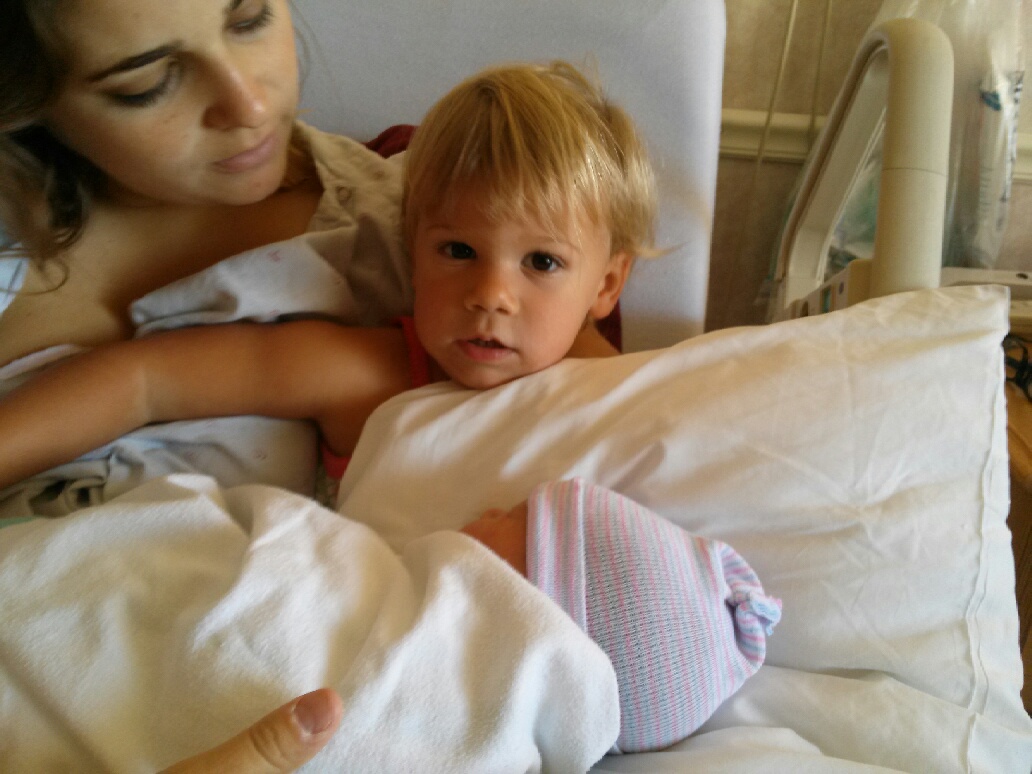 Sean got the more coveted end of the stick and followed Weston out of the room while I got all fixed up. Pretty sure I dozed off in there actually, and probably said something stupid too because my doctor and the nurses were talking to me. As soon as they wheeled me into recovery, Weston was plopped atop my chest and instructed to latch. Latch he did. Vaguely reminiscent of one of those vicious gators on the Discovery Channel snatching an unsuspecting antelope from the river's edge. Breastfeeding...I love you and I hate you too. You give my child the good stuff, but you're horrifically uncomfortable for that first little while.

We stayed in the hospital until Tuesday afternoon. We had a couple of great nurses, a handful of lovely friends and family stop in to visit, and an overall very successful recovery. I could compose the longest list of how this birth/c-section experience was lightyears better than Jordan's (initial health problems, NICU stays, no latching what.so.eva, inconsolable infant screams at alllll the hours, the stress! the stress!) but suffice it to say Weston was a happy, healthy, hungry, carefree guy from the get-go, and Jordan was not any of those things. My poor little girl had a rough go for a little while. But just look at her now: 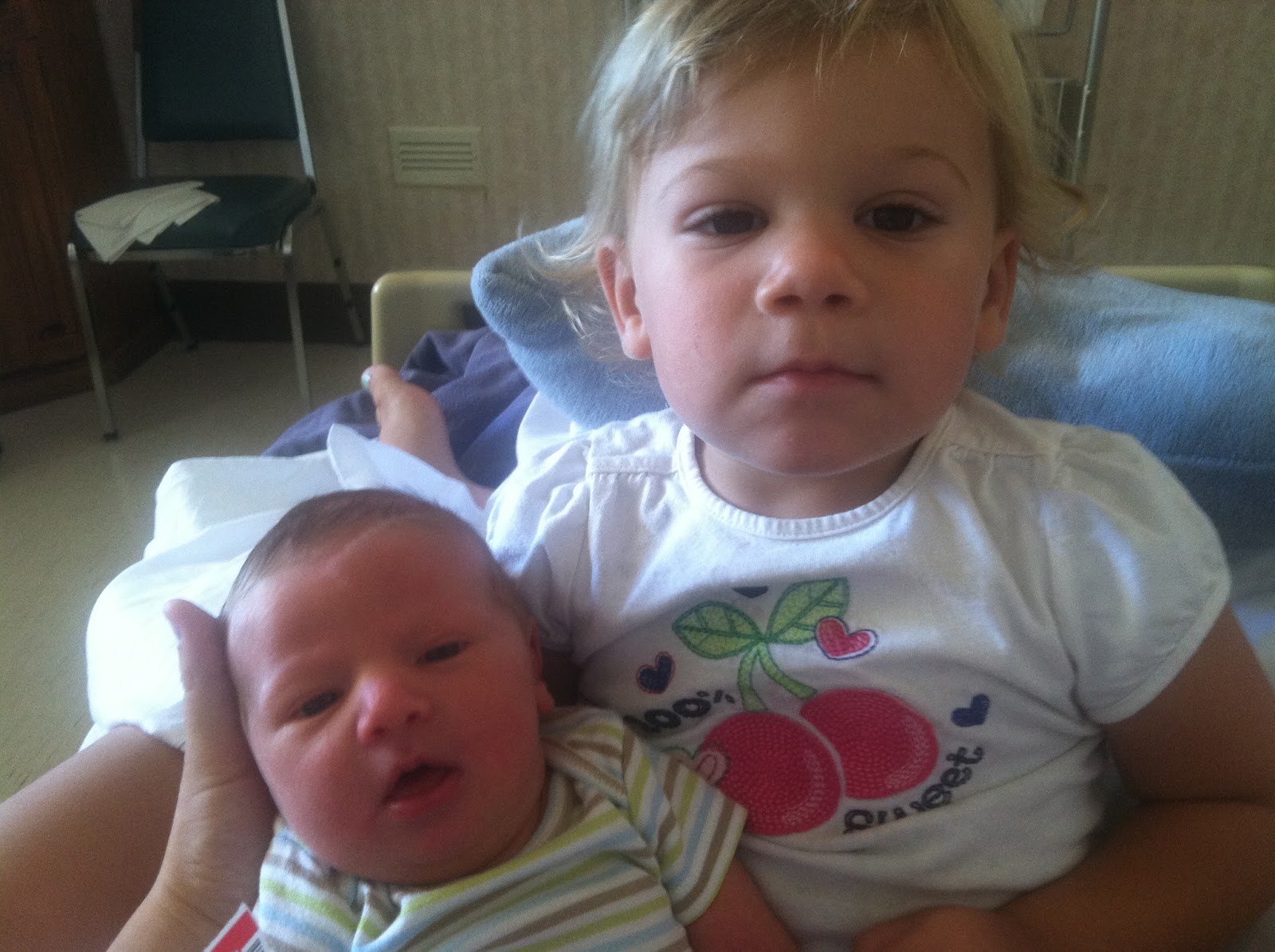 (not the best shot of either of them but I just love it because
Wes looks like a little snapturtle and Jordan looks like his proud pug mother.)

There it is. A birth story for all to see. Weston is growing beautifully and Jordan is doting dutifully. Here's a shot of us all for good measure. (Taken yesterday after a day at the beach so excuuuuse that insane hair and Jordan's lack of clothing. The girl is just never dressed.) 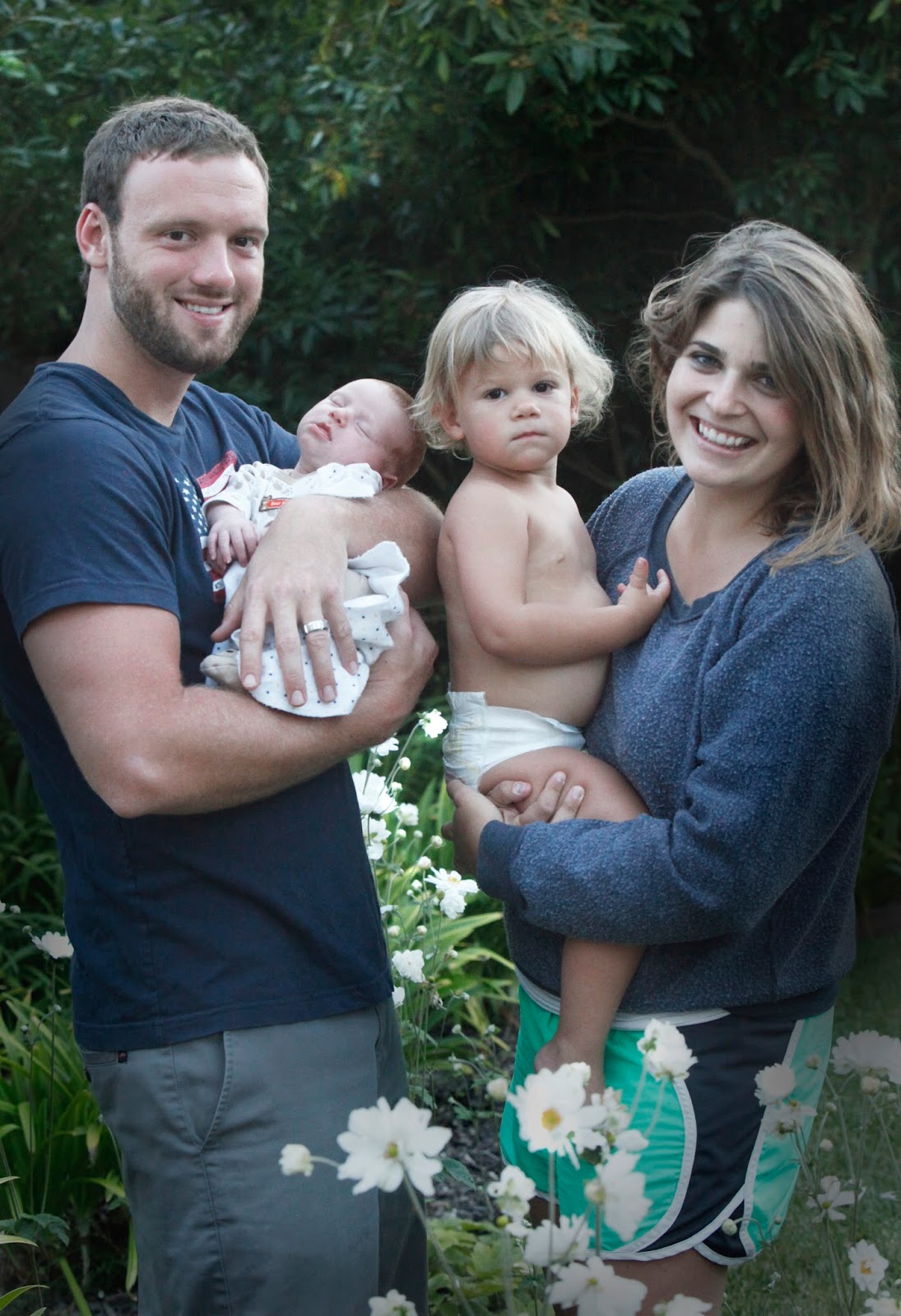 PS - thank you all SO much for all the congratulatory comments on Weston's birth announcement. I didn't get much of a chance to respond to any of them - sorry! - but I loved reading them and was so pleased to get each of them. You guys are the best :)

PPS - This installment is headed for Grace's too.
Posted by Jessie Pope at 2:24 PM