all quiet on the laboring front

I wish I had other news than that. I hadn't been feeling particularly antsy throughout this pregnant journey...until the last few days. I've employed quite a few of Ana's natural labor inducing tricks and am working up the courage to try the castor oil one. I think I just watched too many Shirley Temple flicks growing up and have a highly immature fear of the taste, as Shirley and all the other orphans forced to partake in this natural remedy do.

Friday morning found my sister Audrey and I observing Jordan in the throes of toddler indoor parkplay. We chased that premium rush with an aggressive mall jaunt, with hopes (on my part anyway) of getting some labor started. I had a gnarly contraction hit, in which I stopped to suck wind as Audrey's eyes bugged 10 centimeters instantaneously. She cautiously asked in hushed undertones "Jess, are you going to give birth in this Anthropologie?" For the splittingest of seconds, this sounded vastly appealing. There could be no more beautiful, soothing bedding options for the birthing process than those found in Anthro, and those exquisite pajama sets would be infinities better than a fugly hospital gown. But I feel like I could be blacklisted or something if I gave that a shot. And where would I go when I'm jonesing for imaginery home décor inspiration? Besides, it was a fluke contraction. Jordan and I proceeded to give Auds our 4 cents on some gawgeous skirts and dresses.

Sean, Jordan and I ambled down to the Starbucks around the corner from us on Saturday. Round trip it was probably 1 1/2 miles (#hardcore #wowdontoverdoitjess)...still to no avail. I really thought this trip would help too, considering the way back was all uphill. No dice. I even participated in Sean and Jordan's swim session - something I usually sit out since one of the prerequisites is swimming attire - and floated up and down the pool on my back with my belly a full 6 inches out of water. Jordan kept wondering if I was "seeping, mama?" which is actually a fairly genius idea, thanks girlfriend. I might sneak down there after hours and partake in my nightly not-rest in a state of complete weightlessness. Far more relaxing than a right-to-left flip-flop in 15 minute intervals, can I get an amen?

And then there was Sunday. My aunt gave Sean and I movie passes, and we took our opportunity for a last date before we're reconciled to hermitage for the next few weeks. We saw a matinee of 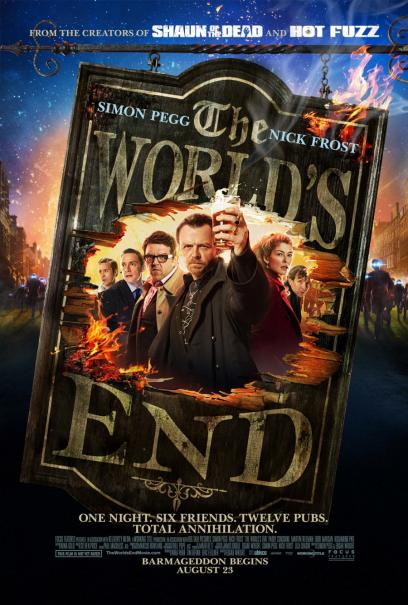 which rang true to all elements of a Pegg/Frost collab, and was really freaking funny. Sean and I laughed audibly throughout, which is pretty uncommon for us stodgies. (Awful language, some innuendo, no sex scenes, FYI. If you like Shaun of the Dead and/or Hot Fuzz - which I do - you're absolutely certain to like this one.)
Throughout﻿ our weekend peppered with light errands and lighter exercise, I received sporadic sock-to-the-gut contractions, and several very sweet texts from various friends and family members inquiring about progress and well-being. Gosh, I'm surrounded by the nicest people. Allll my concentration is on starting labor today, because I'm kinda running out of time. Oh, and because Sean told me yesterday that he was "very disappointed" in me for not having this baby yet, since he consequently had to go to work this morning. Well. There's that. After a "YOU'RE disappointed?! You're disappointed?!" or seven on my part, he assuaged the offense with a back and shoulder rub. Forgiven.
Unless this baby is planning a career in professional camping, I'd venture a guess this is my last post as a mother of one (one ex-utero, that is). Any spare prayer will be greatly appreciated, and let's all commence internal chant: VBAC, VBAC, VBAC. It's catchy.
Geronimo.
﻿
Posted by Jessie Pope at 1:36 PM

Email ThisBlogThis!Share to TwitterShare to FacebookShare to Pinterest
Labels: pregs